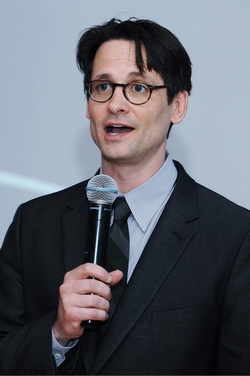 Claude Knobler (host), class of 1983, likes to say, "none of the work I've ever done has really been work!" and when you know a bit about him, it's easy to see what he means.  Upon leaving Tenafly, Claude was determined to become an actor.  Unlike most young performers however, Claude skipped waiting on tables and pursued a path that included television, radio....gorilla. Start with the ape, King Kong to be exact.  After delivering singing telegrams in a gorilla suit New York, Claude was hired to entertain tourists impersonating King Kong on the Empire State Building.  Fortunately, his resume doesn't end there. Later, Claude co-starred in a pilot with a young Brad Pitt called The Kids Are Alright (as Claude points out, Brad was very alright.  The rest of the cast....less so) Claude also appeared alongside Will Smith, Elizabeth Shue and others on sitcoms and TV movies. When a friend asked Claude to talk about Hollywood on the radio, Claude Knobler's Hollywood Reports was born.  Over the next fifteen years, Claude's movie reviews and comedic entertainment reports were heard on morning drive shows in hundreds of U.S. markets including New York, Chicago and Boston, as well as in Australia and New Zealand.  Claude’s essays have been featured in multiple books, including the recently published collection, Carried In Our Hearts.  Tenafly High Sschoool is delighted to have this actor, author, radio host and ex-simian on hand to host our show!
Next artist >> Meredith LaBouff >>