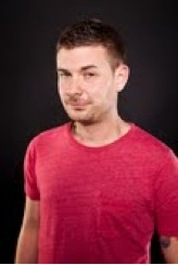 Joe Grubbs, class of 1998, as you have probably already figured out, hails from the mean streets of Tenafly, NJ. In 2006, Joe moved to Los Angeles to further pursue his career. Since the move, Joe has gone on to star in several independent films, become a recurring sketch actor on The Tonight Show with Jay Leno, and has lent his voice to many radio ads, animated series, and most recently has become the voice of the Gerber Knives company. Joe has also begun pre production on the film "Chasing Tail" in which he will star and produce in conjunction with Warner Brothers. It is scheduled for nationwide release the Spring of 2014.

Statement of Support from Joe Grubbs:
Joe would like to extend a big thank you to everyone from THS that had a hand in his growth as a student and as an actor. Always being someone that was a little different, Joe found a home on the THS stage. Without having access to the arts he most likely would have never found his voice in this world and would have never continued to pursue acting as a career. He owes a tremendous amount of gratitude to everyone involved in the arts at THS and more importantly every show he had the chance to perform in for molding him into the actor he is today.