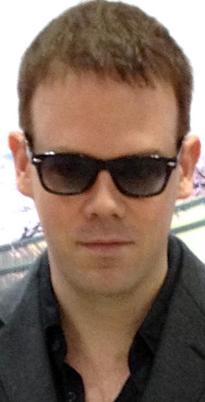 Sean McPhillips, graduated Tenafly High School in 1990, and after a degree from SUNY Purchase began his career at Miramax Films where he became Vice President of Acquisitions during the time of “Life is Beautiful,” “Amelie,” “City of God,” etc.  He personally acquired such diverse titles as Majid Majidi’s critically acclaimed “Baran,” Yuen Wo-Ping’s kung fu debut “Drunken Tai Chi,” Mamoru Oshii's “Avalon” and sequels to the lucrative Pokemon franchise. He ultimately became co-producer of the Japanese animation import “Tokyo Pig.”  Sean then studied film at NYU and co-founded NY-based Secret Hideout Films. His short 35mm directorial debut, “Cupcake,” premiered at the Tribeca Film Festival and was seen worldwide, including at the Lincoln Center Atrium with a live score by composer Lev “Ljova” Zhurbin. His follow-up, “Deadline,” premiered at Montreal, played Tribeca and won the audience award at Santa Monica. “The Cubicle” premiered at Korea's prestigious Puchon International Film Festival. “Cupcake” and “Deadline” will be one of the first shorts to screen on Tribeca's new online channel later in 2013. Sean is currently Senior Vice President and Creative Director in North America for Dream Link Entertainment (DLE), a company based in Tokyo, Japan. This position includes producing, writing and directing animation. He is also currently working on his first feature film.
"Congratulations to two of my favorite people on Earth, of whom I have very fond memories and with whom I still remain friends. I was a drone at THS until I met a guidance counselor who asked me what I wanted to do (really?). I told him and he introduced me to Susan Tall and Jim Collins. It changed my path completely. Our performance of South Pacific remains a major benchmark for me. I still talk to other former students who were in the production - about that specific production - and all the things that happened on and off stage. Acting class, chorus, the madrigals, the senior musical - without these things I would not be the same person, and neither would half the people I'm still in touch with from THS. I hope everyone sees this benefit as a way to look forward by honoring the past. I take a piece of it with me everywhere. I want these new punk kids to have the same opportunity. Save the children and please donate! (and congratulations Ms. Tall and Mr. Collins!)
If I'm not in Japan, I'll definitely be there!" - Sean McPhillips
Next artist >> George Merrick >>