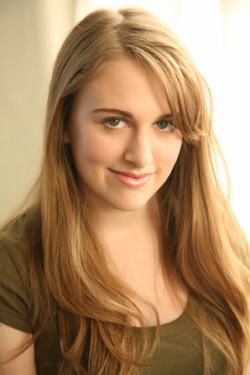 Sofie Zamchick is a singer-songwriter, actress, and musician. She graduated from Tenafly High School in 2010, as well as the Juilliard Pre-College Percussion Program. She is currently studying acting at NYU Tisch School of the Arts in the Experimental Theatre Wing. Zamchick played the role of Linny, the Guinea Pig, on Nick Jr.’s TV show, “The Wonder Pets!” for eight years. She has been a principal actor in Eve Sussman’s art films, and voiced Finn McCool in Matthew Barney’s “Cremaster 3.” She has performed in music videos, TV and radio spots, and most recently in the Rascal’s “Once Upon a Dream” concert.

Zamchick has appeared in three Metropolitan Operas and been lead singer on numerous Kidz Bop CD’s. She composes on guitar, piano and marimba and has performed at the Bitter End, Dixon Place, and Mexicali Blues. Her original songs, “4000 Birds” and “Hoping” were featured in the Off-Broadway show “8 Million Protagonists.” http://www.youtube/sofiezamchick
Next artist >> Christian Zaremba >>